For nearly 40 years the San Fernando Valley Symphony Orchestra has presented the finest performances of symphonic music to the communities of Los Angeles' San Fernando Valley. It is the region's leading symphony orchestra and one of its premiere performing arts organizations. Led by founding Music Director and Conductor James Domine, the orchestra is a showcase for some of the finest musicians and composers in Southern California. Beginning with the 2022-2023 season's opening concert in November, the orchestra will be performing its yearly five-concert season in its new home, the El Portal Theatre on Lankershim Boulevard in North Hollywood.

The SFVSO's dedicated members frequently collaborate with community service organizations and local businesses to produce community outreach programs designed for diverse audiences of all ages. The San Fernando Valley Symphony Orchestra maintains a strong season ticket subscription base and its concerts are frequently sold out. It is a recipient of grants from the County of Los Angeles Department of Arts and Culture, the City of Los Angeles, the Rotary Club, and various other corporate foundations; it also receives support from individual subscribers and concert patrons. 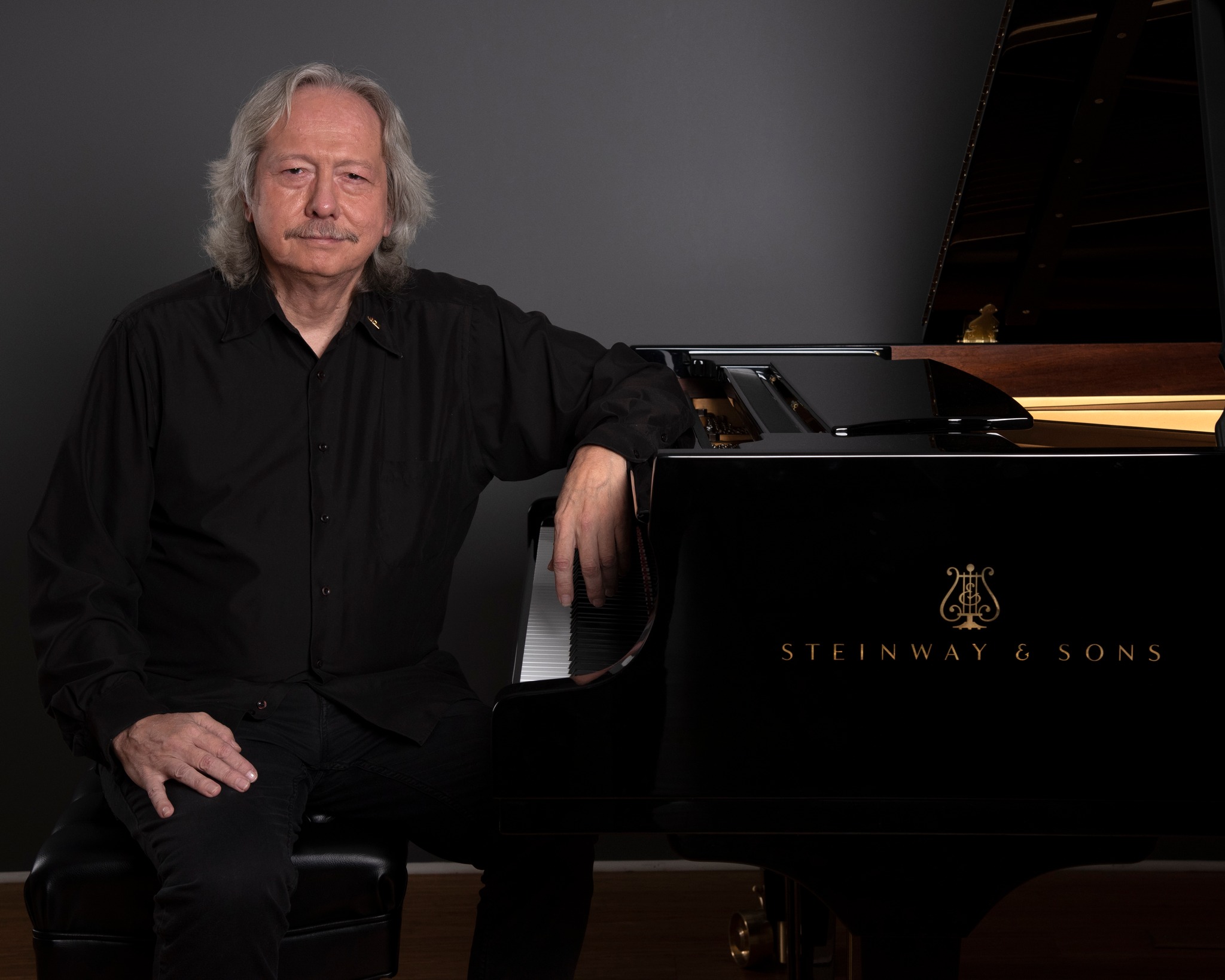 James Elza Domine was born October 9, 1953 in Pasadena, California. At an early age he displayed a precocious interest in music, playing violin in the school orchestras and taking piano lessons. He began formal study of composition and theory at age 16. Domine made his first serious compositional efforts in the form of three suites for solo guitar in E minor, D major and A minor. These suites were subsequently arranged as concerti for guitar and chamber orchestra, and form the point of departure for his repertoire both as performer and composer.

Domine entered UCLA in the Fall Quarter of 1971 and received a Bachelor's Degree in Music. He studied composition, as well as the classical guitar repertoire, and played violin in the orchestra. His first public success as a composer came on May 10, 1977 when his Requiem conducted by Roger Wagner was received with a standing ovation by an enthusiastic audience that filled Schoenberg Hall. In 1979 Domine entered the University of Southern California on a full scholarship, where he studied composition and theory, and earned his Master's Degree.

The same year he founded the Van Nuys Civic Orchestra, a community-based group that eventually became the San Fernando Valley Symphony Orchestra. The SFVSO has featured a year-round concert series at Pierce College in Woodland Hills and plays a leading role in expanding the musical horizons of Southern California residents. As Music Director and Conductor, Domine has led the Orchestra in hundreds of concert performances, and was delighted to have secured the Thousand Oaks Civic Arts Plaza's Scherr Forum Theatre for the 2011-2012 season.

The complete catalog of Domine's musical compositions includes symphonies, concerti, chamber music, a ballet, an opera, "Luke and Sarah," solo instrumental pieces and choral music in a wide variety of styles and genres. These works may be heard at "jamesdomine.com." In addition, in keeping with the time-honored tradition of classical musicians participating in the popular music arena, Domine plays lead guitar and writes songs for the Blues Bandits, Molay Band, Screaming Clams and Symphomaniax. Music from these ensembles is featured on this web site.

Domine has written a novel entitled, "The Naked Man," published in 2006, a story of contemporary life in the San Fernando Valley region of Los Angeles. The book is currently available from on-line publisher LuLu.com and forms the basis for his musical theater play,"Tomahawk," which received its premiere at the Actors Forum Theater in North Hollywood, California in January 2008. His most recent play, "The Dogs of War," premiered to critical acclaim in 2011 at the Hollywood Fringe Festival.

James Domine currently teaches music at Pierce College in Woodland Hills California, where he has developed a dedicated cadre of symphony aficionados and grateful concertgoers. He is currently working on completing the requirements for a Doctor of Musical Arts Degree from Boston University.

Ruth Bruegger, Concertmaster of the San Fernando Valley Symphony Orchestra, has performed all over the world, including Paris and Tokyo. She has played with the Pasadena Symphony, Long Beach Symphony, California Chamber Orchestra, Riverside Symphony and South Bay Chamber Orchestra, as well as with many others. She performs regularly at the Corbin Lounge in Tarzana with the "Symphomaniax," a  well-known  strings and guitar  chamber  quartet  that was formed by James Domine, Music Director  and  Conductor of the San Fernando Valley Symphony Orchestra.
She holds a Bachelor of Arts degree from UCLA.

Her violin playing can be heard on many motion picture soundtracks, including "The Sandlot," "Misery," "Prince of Tides," War of the Roses," "Tootsie" and the "20th Century Fox Fanfare." She has recorded with major artists,  including Rod Stewart, Madonna, Aerosmith, Willie Nelson, Michael Buble, Josh Groban, Muse and others. She can be seen on-screen as the violinist at a "Beverly Hills Housewives" wedding, as well as in several episodes of "The Young and the Restless."

Ruth gives her love and thanks to her three daughters, Tina, Nica and Lisa, and five grandchildren for their love and support. Thanks also to James Domine and the musicians of the SFVSO for the wonderful opportunity tonight to perform two wonderful pieces.

Joanna Ezrin-Schauer was born and raised in Toronto, Canada, where she studied with the renowned composer, teacher, and conductor Clifford Poole. She also played the cello and harp in local orchestras. After receiving her ARCT degree from the Royal Conservatory of Music, she completed annual summer studies at Interlochen, and the Juilliard School, and received her Bachelor of Music from the University of Toronto, and a Master of Music in Piano Performance Degree summa cum laude from California State University Northridge. She also pursued post-graduate studies at the Höchschule für Musik in Stuttgart, Germany, and trained under the respected teacher Sara Compinsky, participating in worldwide piano competitions representing Canada, including the prestigious Rubinstein International Piano Master Competition.

Joanna, who retains her Canadian citizenship, moved to the United States in the 1980’s, settling in Los Angeles to study jazz, pop, and voice, and to pursue a career in music. She recorded on platinum albums and worked extensively in television, films, and commercials while performing live throughout Canada, Europe and the United States, developing a loyal fan base here in Los Angeles. Following the birth of her second child, Joanna “semi-retired” from the long,  odd and stressful hours of commercial and studio work, and devoted herself to full time teaching, studying pedagogy under the tutelage of the highly regarded Frances Robyn and Mark Richman.

Joanna, a state accredited music teacher, is past president of the San Fernando West Valley branch of the Music Teachers’ Association of California. She is the chair of the annual Contemporary Festival, the branch Composer’s Today program, the Sight Reading Festival, and the Improvisation Program. She also teaches AP Music Theory, and prepares student’s college application recital programs for music major auditions. She is a state certified Panel level adjudicator, judging Certificate of Merit examinations, music festivals and competitions throughout the Southern California region. Joanna is a member of the National Guild of Piano Teachers, American College of Musicians, American Federation of Musicians Union Local 47, AFTRA, JCM coach, and is a guest lecturer at California State University Northridge, teaching pedagogy methods. She remains active in studio work, most recently working at Paramount Studios. She is the principal pianist with the San Fernando Valley Symphony Orchestra. For next season’s concert schedule, and to experience great music close to home, go to sfvsymphony.com.